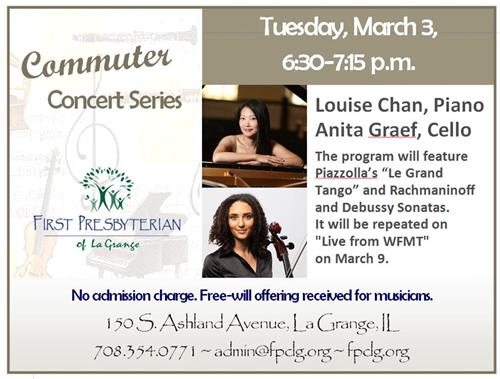 Event Description:
Pianist Louise Chan, a native of Ottawa, Canada, has performed as a solo and chamber musician for audiences across North America, including Orchestra Hall in Chicago, Weill Hall in New York and the National Arts Centre in Ottawa. She is currently on faculty at the Music Institute of Chicago and performs as a keyboardist with the Milwaukee Symphony Orchestra. She is a member of the Royal Conservatory of Music’s College of Examiners and holds degrees from the Eastman School of Music and Northwestern University.

Described as "a world class musician" (Galena Gazette), Chicago native Anita Graef has earned recognition for her music throughout the United States. She has performed with the Cincinnati Symphony Orchestra as a CCM-CSO Diversity Fellow and concertizes frequently, including a recent debut performance on the Dame Myra Hess Memorial Concert series, broadcast nationally on 98.7 WFMT. Upcoming appearances include performances on live radio as a guest of “Live from WFMT,” at Carnegie Hall’s Weill Recital Hall and at the Library of Congress.